Written by Achou
Updated over a week ago

Q: Can I get Custom Audience data into ReportGarden?

A: Google Ads API has limitations on data retrieval with respect to custom audiences. The API does not support retrieval of custom intent audiences

Q: Can I get Auction Insights data into ReportGarden?

A: Google Ads API does not support reporting on auction insights yet. If you want to track competitor rankings, we recommend you use our SEO feature

Q: Can I get Conversion Data into ReportGarden?

A: Yes. Any conversion(s) that you have configured in Google Ads are imported into ReportGarden. You can see them in the metrics tab. For every conversion, there are the corresponding 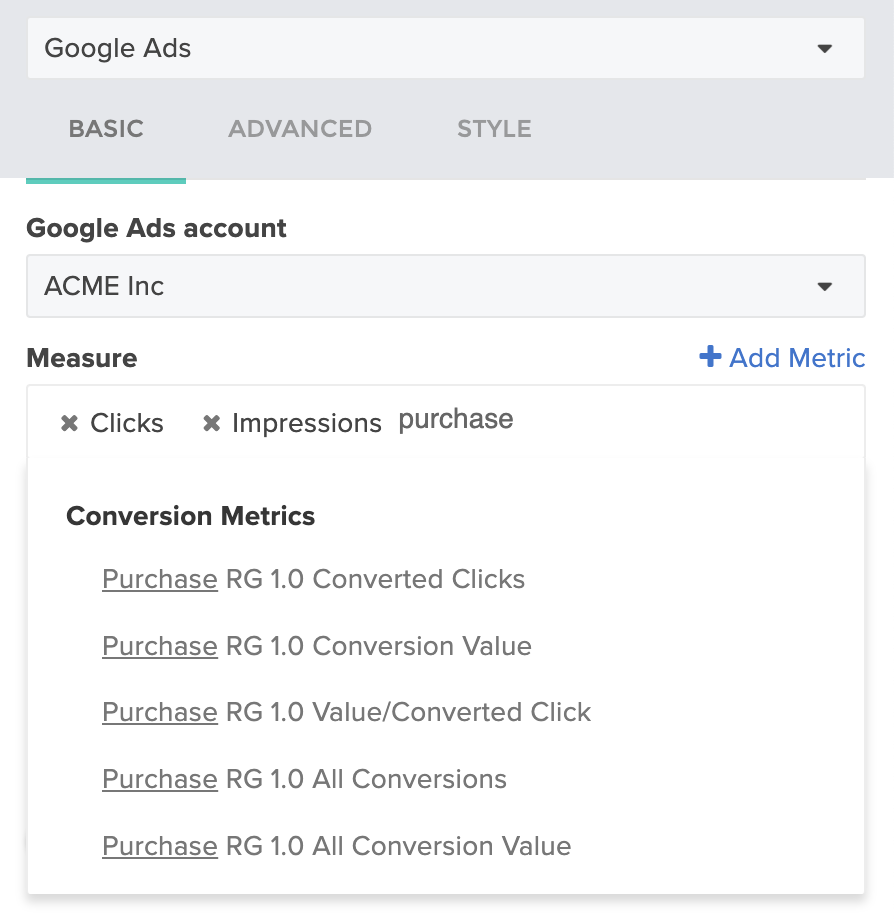 Q: I can't see my conversions in ReportGarden as metrics. What do I need to do?

A: Go to the sub account edit page. There, you will see an option at the top right to Fetch Custom Conversions. Click on that button, and wait for a few seconds to import the conversion metrics.

Go back to the reports page and refresh your report. You will see that the conversion metrics appear like any other metrics while creating/editing a new widget

Q: I have clicked on Fetch Custom Conversions but still can't see the metrics. What do I do?

A: Please check if the conversion created in Google Ads has at least one conversion against it's name. Conversions that do not have any recorded conversions are not pulled into ReportGarden.

Q: What kinds of ad preview does ReportGarden support?

Q: Does ReportGarden support Sitelinks and other extensions?

Q: Can I preview ads for discovery and performance-max campaigns in ReportGarden?

A: Ad previews for discovery and performance campaigns are currently not supported via Google Ads API. We are working on it to see if there is a deterministic way to show this data in ReportGarden.

Q: What is the difference between Clicks and Converted Clicks?

Q: What is the difference between Conversions and Converted Clicks?

A: Conversions are an action that's counted when someone interacts with your ad (for example, clicks a text ad or views a video ad) and then takes an action that you’ve defined as valuable to your business, such as an online purchase or a newsletter signup. Converted Clicks is the number for clicks on your Google ad that resulted in a conversion in a particular conversion window.

Q: What is the difference between Conversions and AllConversions?

A: "All conversions" includes the data in your "Conversions" column plus conversion actions you’ve chosen not to include in your “Conversions” column. It also includes cross-device conversions, store visits, certain phone calls, and more.

Q. How can I pull data for multiple campaigns in ReportGarden?

Q. Will my conversions appear in ReportGarden if they are not included in account level goals?

A: Due to API limitations we are unable to get account level goal information for google ads. But for our users to have more control over reporting, every conversion that is available in Google Ads is exposed as a metric, along with the following derived metrics

b) <Conversion Name> All Conversions

A: No, phone numbers cannot be pulled into the Reportgarden tool. It is a limitation from Google Ads, due to privacy issues.

Q. How can I get ad previews for Performance Max campaign ads?

A: Due to API limitation Ad previews are not available for Performance Max campaign ads. We'll be able to support previews once Google exposes it in their API.

Q. Why is Impression Percentage in ReportGarden different from Google Ads?

Q. Why am I unable to see Dynamic Discovery campaigns for Google Ads?