Written by Sam S
Updated over a week ago

As you all know, recently, Google has done a major release by improving the text ads and making them even large - by adding an extra headline and description to all your expanded text ads😃.

Now, you can generate reports on the same in Report Garden too. Isn't this an icing on the cake?

Here is a bit about the past

Google released the first Expanded Text Ads in 2016. Overnight, ads grew 50% in size. On an average, advertisers saw their ads’ click-through rates (CTR) increase by 20% after this change.

In the past two years, the change is rapid and we search more often for answers and our devices have become large. 140 characters wasn’t enough and Google realized the same thing.

That's why, Google recently made changes to the text ads so that you have more room to convey your message to customers.

You'll now be able to

Below are the major changes after the release: 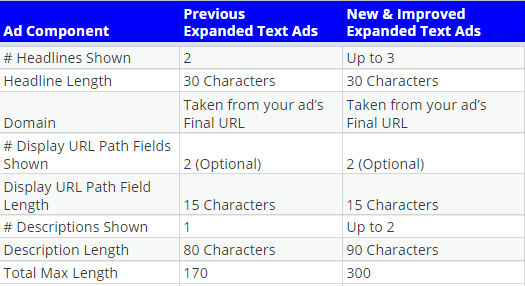 Learn more about the expanded text ads in Google Ads

In Report Garden, you can now generate reports on the improved expanded text ads.

Have more questions? Reach our support team at support.reportgarden.com