All Collections
Reporting
Reports
About Dimensions and Measures

About Dimensions and Measures

Written by Sam S
Updated over a week ago

Every report in ReportGarden is made up of dimensions, data views and metrics.

Dimensions are attributes of your data or categories that you're reporting across. For example, the dimension "Device Type" indicates the type of device used, for example, "Computers" or "Tablets", from which a click has happened.

They define how you group your data and how you organize your report. In ReportGarden, you can track your account performance over time, across countries etc.

Metrics are quantitative measurements or it represents the values that you're measuring. The metric "Clicks" is the total number of clicks. Similarly, the Impressions.

The tables in most of the ReportGarden reports organize dimension values into rows and metrics into columns. For example, this table shows one dimension (Device Type) and two metrics (Clicks and Impressions.) 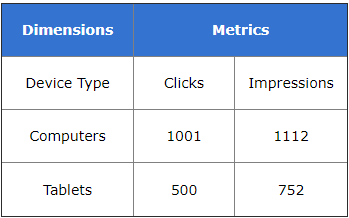 Example: You can measure your account performance by looking at the number of "Clicks," the number of "Pageviews" and so on. The metrics that you see depend on the account you select. The values of the metrics in the report adjust as you change your reporting options, for example, by choosing a different metric family or changing the date range.